Fifth edition of the Bosnia and Herzegovina Journalists’ Association E-Newsletters on the role and future of advertising in the media. 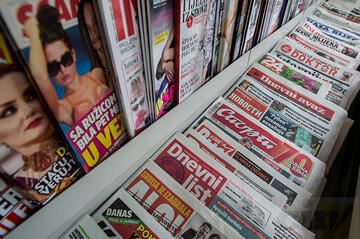 The Bosnia and Herzegovina Journalists’ Association released a special series of its online newsletters, with 5 editions, through the “Media and Public Credibility” project supported by the European Union. The series of newsletters represents a contribution to public debate about transparency of media ownership and it aims to uphold and encourage the adoption of a set of laws aimed to advance the media field and the information market in Bosnia and Herzegovina.

The latest edition focuses on the role and future of advertising in the media in Bosnia Herzegovina, which is still underdeveloped when compared to the advertising markets of neighbouring countries. As stated in the editorial of the special issue, television and the overall media industry have been recording decline in revenues for years.

The report discusses the problems of the advertising market in the country, marked by unfair competition and lack of transparency; the lack of trust towards audience measurements; and the potential role of the adoption of the Law on advertising in BiH in eliminating the flaws that negatively affect the value of the market.

Contributions to this special issue have been authored by Lejla Turčilo, Nataša Tešanović, Adnan Bilal and Ekrem Dupanović, and they include an interview with Helena Mandić, Broadcasting Director Assistant at Communication Regulatory Agency of BiH .

The full archive of all E-newsletters in the series is available here.