Media Monitoring Report: Reporting on minority issues and diversity in the media

Supported by the OSCE Mission to Moldova, the Moldovan Independent Journalism Center monitored TV and online press for one month in order to determine how they report on topics related to ethnic minorities and other groups vulnerable to hate speech 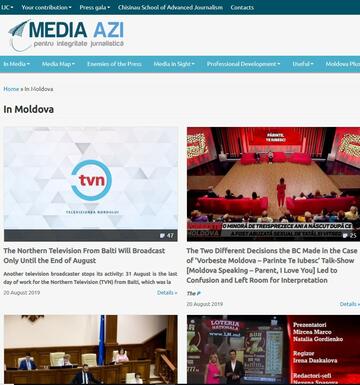 From May 7th to June 7th 2019, Romanian and Russian-language media in Moldova were monitored, and all items related to ethnic groups and refugees, migrants, the LGBT community, and persons with physical and psychosocial disabilities were analysed according to their size, placement in the page/bulletin, and emphasis.

In 10 media outlets (3 TV stations and 7 websites) the Independent Journalism Center found a total of 347 relevant articles, 244 on web portals and 103 on TV.

In general, ethnic minorities rarely become the main theme of a report: they are interesting for Moldovan media only when something happens (events, cultural activities, or crimes). The practice of labelling people involved in a crime by their ethnicity is very common, though the Moldovan Style Guide of Ethical Norms for Journalists has a section on Tolerance and Non-Discrimination that recommends to “avoid highlighting the ethnicity or the illness of a suspect, an accused, a defendant, a convict, a criminal...”. In most cases, also the Journalist’s Code of Ethics was neglected and ethnicity was mentioned even when irrelevant from an editorial point of view.

In most of the relevant material monitored, however, the authors used “balanced, neutral, news-specific language” and hate speech was not directly promoted by the media. Isolated cases contain stereotypical words or expressions.

Among the online media that allow comments from readers, some do not moderate them, and these are the cases where hate speech or prejudices come to the surface.

The most vulnerable subjects to these attacks in Moldova are Russians, Jews, and LGBT persons.

The general conclusion drawn by the authors is that “media outlets in the Republic of Moldova don't pay enough attention to topics related to minorities and diversity. As a rule, topics that are tangential to these themes are reported in the news without an in-depth, detailed and multifaceted analysis that would allow the majority to be informed and learn more about minority groups”.