Media Ownership and Finances in Turkey. Increasing Concentration and Clientelism 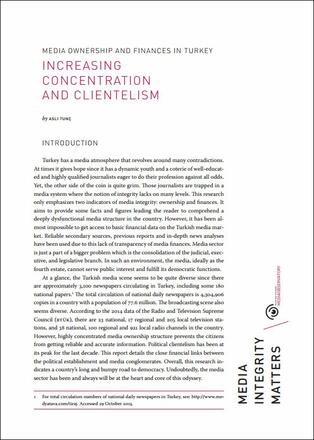 Despite the apparent diversity characterizing the media landscape of Turkey, the country media system is affected by a significant lack of integrity. Two indicators of media integrity are considered in this research: the ownership structure and finances.

The lack of transparency of media finances makes it practically impossible to get access to basic financial data on the Turkish media market.

With approximately 3,100 newspapers circulating in Turkey and 23 national, 17 regional and 205 local television stations, Turkey seems to have a good basis for claiming media diversity exist in the country. Yet, highly concentrated media ownership structure counterbalances these numbers, placing the majority of media under control of a few. Along with this, political clientelism has increasingly impacted in the last decade, with closer financial links between the political establishment and media conglomerates. The combination of these two elements ultimately prevents citizens from getting reliable and accurate information.