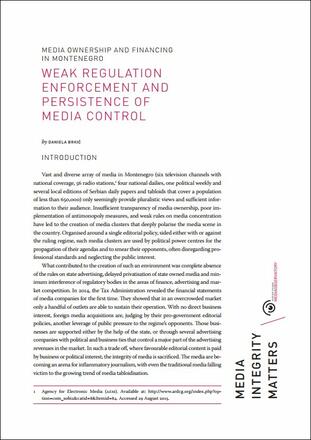 Media pluralism in Montenegro is only apparent, as indeed insufficient transparency of media ownership and poor implementation of the weak rules on media concentration have led to the creation of media clusters that deeply polarise the media scene.

The complete absence of rules on state advertising and the delayed privatisation of state owned outlets have contributed to create a media landscape in which media clusters, aligned with the regime or openly opposing it, function as the mouthpiece of political powers. Smear campaigns are the tolls often used to target political opponents, contributing to an incresing disregard of professional standards.