Media freedom and independence in 14 European countries: A comparative perspective 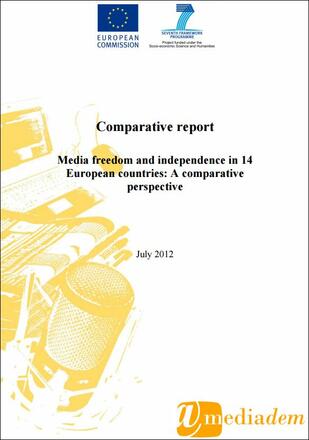 The analysis builds on Mediadem’s empirical country case findings as well as the broader scholarly literature, and focuses on the most pertinent questions and key issue areas for media freedom and independence emerging from the project’s empirical research. The countries covered are Belgium, Bulgaria, Croatia, Denmark, Estonia, Finland, Germany, Greece, Italy, Romania, Slovakia, Spain, Turkey and the UK.  The collection consists of five reports.

The first report  examines in a comparative fashion the freedom and independence of public service broadcasters in the fourteen Mediadem countries.

The second one explores the complex relationship between politics and the media in the context of Eastern European countries.

The third report is a comparative examination of the current trends and policy approaches pertaining to new media services in the 14 countries considered, and the guarantees in place to ensure media freedom and independence in the digital environment.

The last report  focuses on professional autonomy in journalism as a factor for safeguarding freedom of expression.