Media ownership and finances in Kosovo: Legal vacuum and lack of transparency 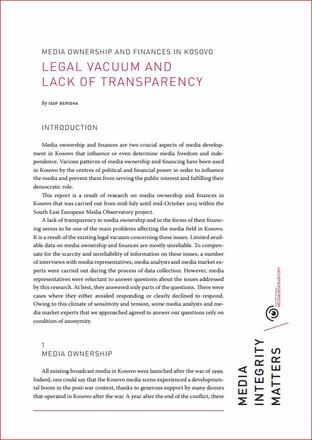 This study investigates the lack of transparency in media ownership and financing in Kosovo, considered as crucial elements in the strategies of the political and financial power in order to influence the media and prevent them from serving the public interest and fulfilling their democratic role.

Based on a research conducted from mid-July until mid-October 2015 within the South East European Media Observatory project, the report notes an existing legal vacuum coupled with limited and unreliable data on media ownership and financing.

The study addresses media ownership and relevant regulations of this aspect in Kosovo, pointing out different patterns existing in the television and print media market. Noting that the current media legislation in Kosovo does not cover media ownership transparency and concentration, the study also highlights the challenges posed by the rapid online media market expansion, often resulting in a drastic deterioration of professional standards. Takeover of media by large commercial groups is another worrisome trait of media ownership in Kosovo.

Media financing is significantly affected by scarce transparency and a legal vacuum which perpetrates this situation. As foreign donors started to withdraw their support to media, these became vulnerable to political and economic pressure. Media integrity is in this way compromised due to the fact that media exchange favourable coverage for financial support by economic and political powers.

Direct state financing of media is admitted only for the public broadcaster RTK since the Law on Radio Television of Kosovo passed in 2012. This solution should have been modified in 2015, but no agreement has been reached and this form of financing is regarded as a tool to influence the editorial policy of the public broadcaster.

Indirect state financing plays a relevant role in the form of advertisement, especially by public companies that remain the main advertiser in Kosovo. The advertising market of Kosovo remains opaque and no data are available.