An analysis of the media situation in Romania, released by the Center for Media Transparency, highlights different media models in the country, their relation to politics and the deriving challenges in terms of media pluralism and transparency 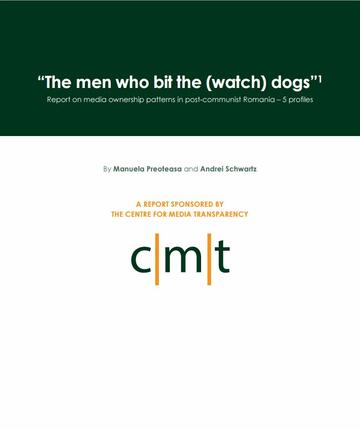 Considering the work of Paul Radu  or the activities of the local branch of the OCCRP network , one would expect that Romania's records in the field of media freedom are not too negative. A country of award-winning investigative journalists, Romania is yet confronted with challenges which are only partially common to post-communist countries, while others derive from specific political and economic developments unfolded in the country during the transition period.

The Centre for Media Transparency, based in London, has released a study on the media situation in the country, focusing in particular on media ownership patterns and their impact on media freedom. The report , which is fully available online, offers a short overview of the development of post-communist Romanian media, in particular of the television market. It primarily focuses on transparency and ownership, its goal being to highlight different media models that have been applied in Romania and their relation, if any, to politics. Written by Manuela Preoteasa and Andrei Schwartz, the study moves from the consideration that in Central Eastern Europe, democratic institutions and media institutions emerged simultaneously and interdependently, posing structural challenges for the development of free media.

Romanian media, the report specifies, has played an essential role within the politics – business – justice triangle, putting journalists in a very uneasy situation: “At times advocates of justice and anti-corruption and at times protectors of secrets, they work within a professional landscape characterized by both economic and political concentrations, as well as by opaque financing sources”.

The report analyses the development of Romanian media landscape, suggests a division into broad stages of development which mostly applies also to other post-communist countries: immediately after 1989 a first wave of journalistic enthusiasm when media outlets proliferated (1,200 newspapers in the early 1990s), followed by a season of media instrumentalisation, which set the control of political and economic powers over printed media in the country.
According to the authors, “What is particular to the Romanian case has to do with an enduring and powerful sentiment that its media structures are haunted by the communist past". Two elements mark the current media landscape in the country: "Ownership connections to the old secret police (“Securitate”), and the usage of money, obscurely produced during the communist regime and poorly tracked in the transitional period.

Consequently, some of the most important media owners – public figures that have played essential roles in the social, economic and cultural life of post-communist Romania – have in fact highly complex roots, as former collaborators of the communist secret police and business beneficiaries of the transition period.” A paradox seems to arise from this connection, producing a clash between ethical concern peculiar to the media industry and the very origins of its financing sources, claim Preoteasa and Schwartz.