Media pluralism and democracy: outcomes of the 2016 Annual Colloquium on Fundamental Rights 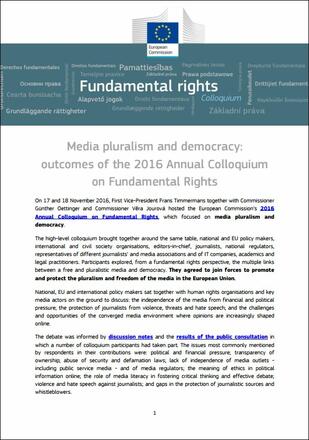 Participants explored, from a fundamental rights perspective, the multiple links between a free and pluralistic media and democracy. Discussions drew on the results of a special Eurobarometer survey on media pluralism and democracy and of the Media Pluralism Monitor , which makes clear that no EU Member State is free from risks to media pluralism.

Six targeted round tables looked at concrete ways to step up collective action to safeguard and promote media freedom and pluralism. Their focus was specifically taking into account the following aspects, which are discussed from different perspectives in the report presenting the Conclusion of the dialogue: