Media regulatory authorities and hate speech in the Western Balkans

Which role can national regulatory authorities play in tackling hate speech? Experience and issues faced in this report focused on the Western Balkan countries 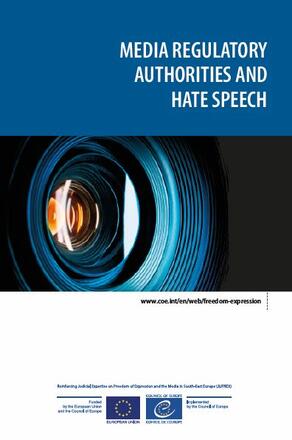 The report is the result of a joint effort carried out by the national media regulatory authorities in the seven Western Balkan countries (Albania, Bosnia Herzegovina, Croatia, Kosovo, Macedonia, Montenegro and Serbia) which first took the form of a conference for regional cooperation on hate speech and the protection of minors. The conference was held in Montenegro in July 2016 and was promoted in the context of the JUFREX project funded by the Council of Europe and the European Union.

For each country, the report briefly presents the powers given to their national regulatory authorities: they differ from each other in terms of extent, as some authorities can issue sanctions while other cannot. The richest part of the report consists in the review of the most interesting cases of hate speech the regulatory authorities have dealt with in the 1999-2017 period, which are listed and summarised: in this way, the main issues at stake are highlighted. The review is completed by an annex to the report, which provides an overview on the different national legal frameworks.

While regulatory authorities in the Balkans face similar challenges with regard to the other European countries, there are two features specific to the region. First, the Western Balkan countries have a first-hand experience of the detrimental consequences of the exacerbation of hate speech and propaganda, as the Yugoslav wars were partly fuelled by hatred spread through the media. Second, most national regulatory authorities in these countries are facing a similar problem of reduction of their independence and powers, to the advantage of political actors.

In the conclusions, the authors of the report list the elements contributing to the establishment of an effective framework against hate speech, on the basis of the experience of their regulatory authorities in the past couple of decades. In particular, they stress the features that make regulatory authorities effective: they should have appropriate powers, act with transparency, professionalism, accountability, and inclusiveness, and they should be ready to cooperate with other actors involved. On top of that, it is deemed crucial to promote media literacy and self-regulatory practices, in order to foster a thriving cultural and media context.