The third edition of a special series of BiH online bulletins, implemented through the “Media and Public Credibility ” project (supported by the EU), which the European Federation of Journalists is also involved in 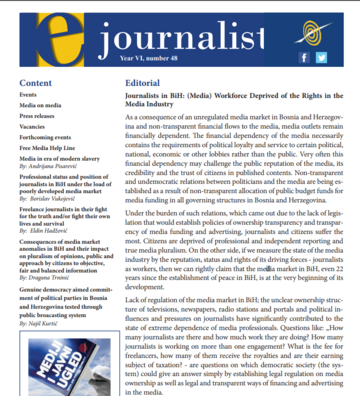 "ejournalist" is the periodic publication released by the Journalists Association of Bosnia Herzegovina. This edition of the bulletin e-journalist represents a contribution to the public debate regarding the transparency of media ownership and upholding and encouraging the adoption of laws aimed to advance the situation of media and information market in Bosnia and Herzegovina. It examines severe consequences on journalists and citizens that arise from non-transparent media financing. Several authors have contributed to the issue.

Andrijana Pisarević’s article focuses on the reasons of  the “complete instability and uncertainty” of BiH’s journalists, while Borislav Vukojević underlines the unsatisfactory working conditions of journalists in BiH, including their being under “constant political pressure, economical pressures or some other pressures based on personal interests”.

Eldin Hadžović explores the uncertainties deriving from being a freelance journalist, adding that “social, material or health insurance uncertainty places them in vulnerable position where they often become subjects to all forms and shapes of flammable and burning populism, from both right and left hand sides”. Dragana Trninić, who states that “there is media pluralism, but there is no pluralism in media in Bosnia and Herzegovina”, tackles the impact of media market anomalies on pluralism of opinions.

Finally, Najil Kurtić questions the approach and course manifested by all the political parties towards the public broadcasters in BiH and their commitment to democratic constitution of the country.