The Council of Europe Commissioner for Human Rights, Dunja Mijatović, calls on the Slovenian authorities to put a stop to the marked deterioration of freedom of expression and of the media in the country 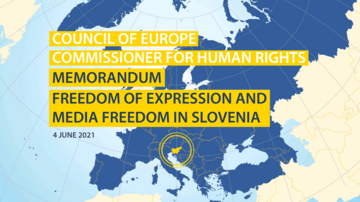 The Memorandum addresses a recent increase in the number of reported incidents regarding freedom of expression and media freedom in Slovenia. It builds on the Commissioner’s thematic and country work, including an online dialogue which was held in the course of April 2021.

The Commissioner warns that some steps taken by the Slovenian government in recent months risk undermining the ability of independent voices to speak freely. She stresses that hostile public discourse, as well as smear campaigns and intimidation targeting civil society activists and those who express critical opinions, harm free expression and can have a chilling effect on media freedom.

The Commissioner regrets that the Slovenian government appears to have used the COVID-19 pandemic to discourage the free expression of dissent or political opposition. Several measures restricting the right to protest, including prolonged blanket bans on public assemblies and heavy fines imposed on protestors, seem disproportionate and risk undermining freedom of expression. While being mindful of the authorities’ responsibility to protect public health, the Commissioner recommends that the authorities find the proper balance in order to uphold the right to freedom of peaceful assembly. She stresses that democratic governance requires the facilitation of public participation and taking public opinion into consideration.

The comments of the government of Slovenia are also available .