The Media Pluralism Monitor (MPM) is a tool developed by the Centre for Media Pluralism and Media Freedom to assess the risks to media pluralism in 32 European countries (27 EU Member States and 5 candidate countries). We present the results of the Italian chapter 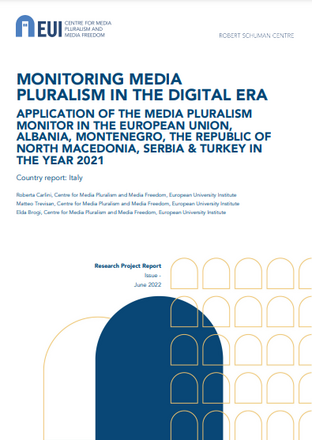 In Italy, television is still the main source of information. In 2021, the Internet experienced a marked increase, while the use of newspapers and radio declined. The pandemic accelerated the trend towards concentration. The top players are four, the first of which is the GEDI group. Among them, only one (Cairo/RCS) is a pure publisher, while the others undertake additional activities.

Italy registers a low risk in the fundamental protection area (32%). Among the positive updates, the authors mention the criminal law on defamation which was the object of two interventions by the Constitutional Court. Although a legislative reform is still pending, the Court limited the possible prison sentences for journalists. Another improvement in the fundamental protection area is related to access to the Internet. However, risks remain in relation to the effectiveness of the legal framework. Attacks and intimidations of journalists are on the rise and working conditions are deteriorating. The authors recommend to the State to approve a reform of the law on conflict of interest, guarantee an enabling environment for journalists, introduce an anti-SLAPPs law and extend the protection of whistleblowers.

Market plurality presents the highest risk score within the Italian MPM evaluation (63%). Although transparency of media ownership is guaranteed, information held in the register is not easily accessible. The higher risks in this area are due to the high concentration of ownership. Additionally, high concentration characterises the online advertising market too. The high market concentration and the presence of intertwined interests between media industries and other businesses contribute to amplifying the risks of commercial influence on editorial independence. Among the recommendations to the State, there is the proposal to use part of the revenue emerging from the taxation of digital services to sustain journalism and to guarantee that the economic agreements between publishers and platforms on the use of copyright protected content are transparent and effective.

The political independence area registers a slight increase of the risk score (53%). The highest risk is related to the independence of the PSM, particularly due to the procedures for appointments in top management, which do not protect the public broadcaster from political influence. Other risks concern the lack of an effective discipline for conflicts of interest, the rules set for fairness of information in electoral periods, the rules on the distribution of public subsidies, and the regulation of state advertising to the media. The authors recommend to the political parties to provide details regarding their expenditure for political advertising online and to the online platforms to disclose the criteria adopted by means of self-regulation.

Italy is at medium risk in the social inclusiveness area (55%). Access to media for local/regional communities and for community media, together with access to media for women, recorded some progress. However, the improvement in the access to media for women is mostly related to PSM’s new appointments, and the score is still worryingly high (75%). This is why the authors recommend to the media actors to tackle stereotypes and promote an equal representation and presence of women. Media literacy and protection against illegal and harmful speech are still at a high level.

Except for social inclusiveness, the digital risk level in Italy is lower than the overall risk in all areas. The digital dimension shows a lower risk for indicators related to concentration, economic sustainability, and editorial autonomy of digital native media. The digital platforms’ dominance in the online advertising market and in intermediating access to the news is a risk factor.