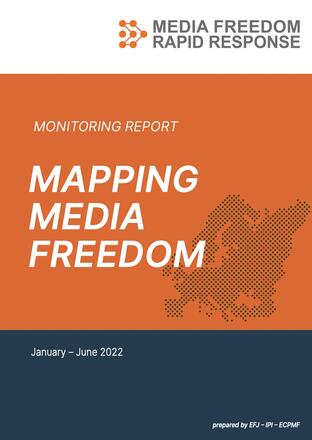 The report analyses alerts originated in 29 countries, an area comprising both EU Members States as well as candidate countries. Moldova and Ukraine both became EU candidate countries last June. However, while Moldova will only figure in MFRR next semester report, press freedom violations perpetrated in Ukraine since the start of the Russian aggression had been monitored in a chapter of the current document.

The report dedicates an in-depth analysis to a number of selected countries where challenges to journalism are on the rise according to the collected data: Turkey, Germany, France, Serbia, Greece, Poland, Spain, and Malta.

The most common attacks registered (39.2%) took the shape of verbal attacks, harassment, and threats, while a significant number of individuals have been subjected to legal incidents (30.9%), such as detention, criminal charges, civil lawsuits, and interrogations.

The Media Freedom Rapid Response recorded a number of cases involving physical attacks (19.3%). The most dramatic one resulted in the assassination of Güngör Arslan, owner and managing editor of Turkish local outlet Ses Kocaeli.

Finally, MFRR registered alerts related to attacks on media professionals’ property (14.2%) and a concerning number of cases (12.9%) regarding various kinds of censorship ranging from blocked access to information to denied accreditation to press conferences.