Polish public TV fails to respect the rules of pluralism, impartiality, balance, and independence of content: this is the outcome of the monitoring of the main news programme “Wiadomości” in the two weeks before European elections

Publication Date: June 2019
Research and Editorial Team: Andrzej Krajewski and the team of the Journalist Society [Towarzystwo Dziennikarskie] with the support and cooperation of Stefan Batory Foundation
Link: Monitoring of the 2019 European Parliament election campaign in the main news programme of Polish public TV 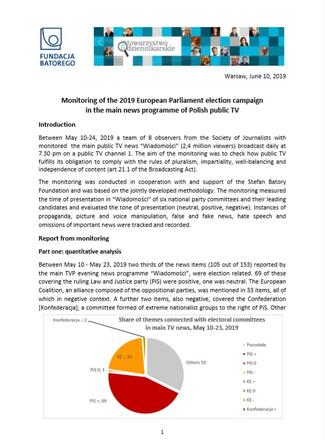 New digital threats to media pluralism in the information age

Between May 10th-24th, 2019 a team of 8 observers from the Society of Journalists monitored the main public TV news “Wiadomości” (2.4 million viewers) broadcast daily at 7.30 pm on the public TV channel 1.

This article, a 4-page report published by the Stefan Baroty Foundation summarising the results of the monitoring, using quantitative and qualitative analysis. Both indicate that “Wiadomości” favoured the ruling party not only in number of mentions, but also in the quality of the language used to mention the opposition candidates, even using fake news, picture and sound manipulations.

This monitoring report concludes that the programme “Wiadomości” “not only failed to fulfill the legal requirements of impartiality, balance, pluralism and independence, but also ran and exposed the ruling party propaganda materials which constitutes a violation of the Electoral law”.