Montenegro Freedom of the Press 2016

Freedom House Montenegro report for 2016 draws a comprehensive picture of the latest developments, taking into account the legal environment as well as political and economic interferences in the regular functioning of media 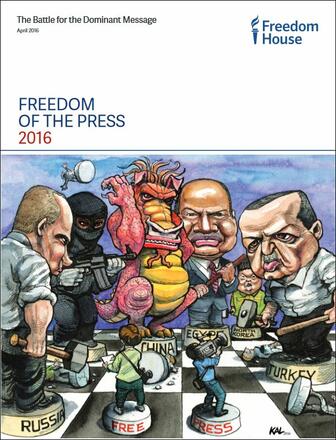 Freedom House report for 2016 notes a deterioration of press freedom in the country, noting that "the media landscape in Montenegro is heavily polarized along political lines. Journalists critical of Prime Minister Milo Đukanović and his family often find themselves the targets of defamation suits. Ineffective media self-regulation contributes to a widespread lack of professionalism among journalists. Reporters covering sensitive topics risk threats and physical attacks. Media ownership is often difficult to determine."

With comparison to previous years, deterioration is recorded both in the legal environment and in the economic interference. In the first case, negative developments relate in particular to the abuse of legal proceedings to silence media. Although defamation was decriminalized in 2011, the report notes, “the independent dailies Vijesti and Dan and the weekly Monitor have been fined hundreds of thousands of Euros in damages for insulting Đukanović or his family members”. Moreover, resistance by public bodies to provide access to information is a persistent violation. Concern is raised also regarding lack of financial independence for the country’s media regulators.

The existence of political interference on editorial policies is stable but worrying, and it is a major reason for the heavy polarization of the media landscape along political lines, with “media outlets frequently run attack pieces against one another”.

Among the most noteworthy events reported: