IREX Media Sustainability Index (MSI) considers developments over time in the media landscape of Montenegro, with a specific focus on economic sustainability; quality of journalism and management practices 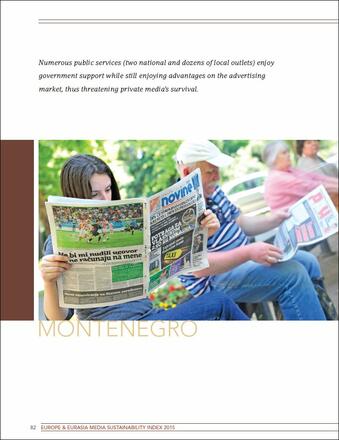 Negative trends persist in the media landscape of Montenegro. Polarization has been noted also in the media sector, with media in line with the ruling party, i.e. DPS (such as Pobjeda, Montenegrin Radio, and TV-RTCG) which openly clashed with the most influential private print media (Vijesti and Dan), particularly on the issue of local elections.

The media community is still highly politicized, prone to internal conflicts, and lacking solidarity to address threats to freedom of speech. Furthermore, the media still suffer from a lack of professionalism, displayed in tendentious editorial policies, hate speech, and poor protection of personal data.

Five different objectives are assessed in this report:

With the exception of the first objective, “Free speech”, all other parameters considered by IREX have recorded a stable record in the period 2010-2015.

Comparative data are provided for each indicator in the time span considered by the report (2010-2015). The overall performance of the country is confronted with the developments registered in the other countries of the region. Since 2014, the has been no significant change in the overall situation of media sustainability in Montenegro.

The Media Sustainability Index (MSI) is a product of IREX with funding from USAID.