In Montenegro Journalism remains a battleground, with deep divisions rooted in commercial and political problems. Few of Montenegro’s 73 media outlets distance themselves from political polarization 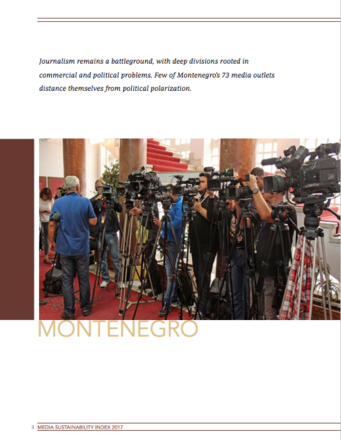 IREX Media Sustainability Index (MSI) considers developments over time, with a specific focus on economic sustainability, quality of journalism and management practices. According to this research, negative trends persist in Montenegro media sector, despite relevant media regulations are aligned with international legal frameworks as well as a new code of ethics was adopted in 2016.

Perennial confrontations between influential media are the rule, while significant gaps exist in self-regulation, demonstrated by huge gaps in journalistic professionalism.

In 2016 national public broadcaster Radio and Television of Montenegro (RTCG) was under immense political pressure. It resulted in the dismissal of both the television director and the general director. Few of Montenegro’s 73 media outlets distance themselves from political polarization. Although 2016 had no significant cases of attacks on journalists, shadows linger from unsolved cases from the past and lead to self-censorship.

As in previous years, journalistic profession is being downgraded. The economic status of journalists is low, their trade unions are weak, and the quality of their profession is under threat, and as such Montenegro has few reputable journalists. The average salary in journalism is below the national average of €500 and led to few examples of specialized journalism. Despite the rise of digital platforms and a higher quantity of news sources than the average of the European Union, media are experiencing an overall deterioration.

The Media Sustainability Index (MSI) is a product of IREX with funding from USAID that assess on an annual basis five different objectives: free speech, professional journalism, plurality of news sources, business management and supporting institutions.