Montenegro: Indicators for the level of media freedom and journalists’ safety

Supported by the European Union, the Trade Union of Media of Montenegro has produced a report which intends to measure the country's level of media freedom using three main indicators 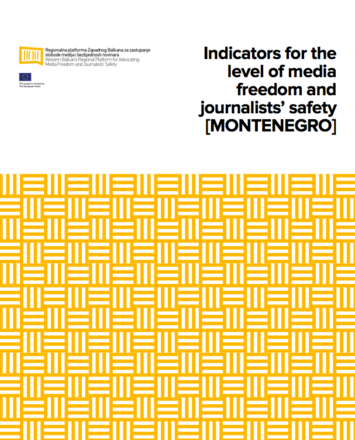 This report presents the findings of the research conducted within the regional project Western Balkan’s Regional Platform for advocating media freedom and journalists’ safety, which was implemented by national journalists’ associations not only in Montenegro, but also in Bosnia and Herzegovina, Kosovo, Macedonia and Serbia.

The main objective of the research is to provide baseline assessments which will be further used in a regional mechanism for monitoring media freedoms at local, national and regional level. Being part of a broader project, this research has been conducted on the basis of a common methodology. According to this approach, the level of media freedom can be measured using three indicators: 1) legal protection of media and journalists’ freedoms; 2) Journalists’ position in the newsrooms, professional ethics and level of censorship; 3) Journalists’ safety.

Although partly obsolete, when applied media laws in Montenegro still provide good guarantees for the press and the media. The Agency for Electronic Media is formally separated from the influence of political or public figures, but it is not publicly perceived as an independent entity. Three quarters of journalists in Montenegro have permanent work contracts and they mostly work for the Public Broadcasting Service, but the average salary is below the national average. From 2013 until July 2016, the Police Directorate of Montenegro registered 41 cases of threats endangering media employees, including attacks on journalists. The report includes a list of recommendations for Montenegrin authorities.

The comparative analysis of the five countries involved in the Balkan's Regional Platform is available at this link.