The “Nations in Transit” report on Hungary by Freedom House (2018) provides an overview of the country’s democratic institutions, including a section devoted to independent media 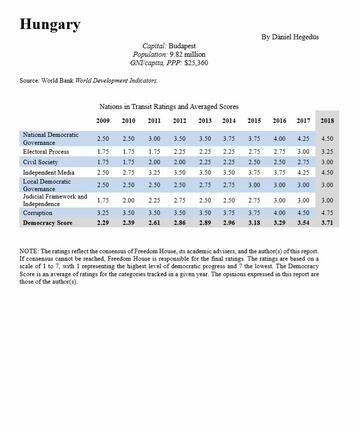 The general trend observed in the country during 2017 is a worrying drop in all the analysed fields, resulting in the decline of Hungary’s Democratic Score from 3.54 to 3.71.

In fact, through the adoption of measures like the ‘Lex CEU’, the ‘Billboard Law’, the ‘Lex NGO’, and the related anti-NGO and ‘anti-Soros’ campaigns, the Hungarian government led by Viktor Orbán has shown increasing authoritarian tendencies. Among others, the report highlighted the following concerning issues:

With regards to the Hungarian media environment, the report underlines the following key findings: