The "Nations in Transit" Report on Slovenia by Freedom House (2018) provides an overview of the country's democratic institutions, including a section devoted to independent media. This digest focuses on this section 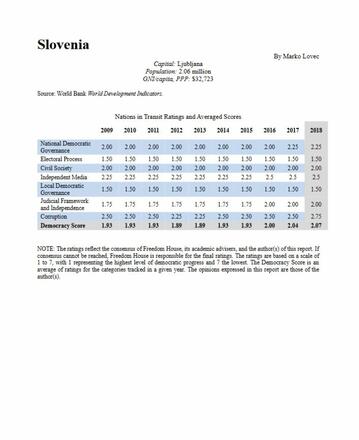 Media freedom in Slovenia remained stable throughout 2017. The whole media environment was relatively positive when compared with the worsening condition of the press in the Balkan region. Reporting freely on corruption and sensitive matters was possible, although some journalists faced pressure from political groups and influential people. Holding public figures accountable was challenging due to several reasons, mostly the weak role of professional organisations, journalists’ precarious economic conditions, and links between media owners, political parties, and lobby groups.

In addition, the media market was increasingly distorted due to the growing involvement of "political outlets", dissolving the line between reporting and party propaganda.

There was an intensive use of local media outlets by mayors. This led several NGOs and media organisations to call for an end to illegitimate and non-transparent practices of financing and illegitimate state aid to the local media.

The period covered by the report also witnessed an involvement of judicial authorities in the publication and removal of several articles, displaying an obstruction in media freedom, such as the ban over the weekly Reporter for publishing a story about Samo and Iza Login, two of the richest Slovenians.
Concentration in the media market did not help media independence and did not allow the entry of new players on the Slovenian media scene, as it has been for many years.
Finally, although in 2017 there was an improvement in the macroeconomic environment (with a positive growth around 4.4%), this did not translate into a more stable economic position for the majority of journalists.