New digital threats to media pluralism in the information age 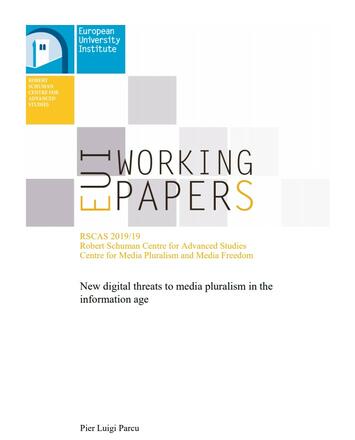 Confronting the Crisis in Independent Media

Democracy at Risk: Threats and Attacks Against Media Freedom in Europe. Annual Report 2019

The study focuses on threats and concerns related to information online and aims at examining the origin and content of these risks, also discussing the responses emerging from markets and societies.

This short overview separates threats to media pluralism and quality information into two main categories: threats produced by the new economic models emerged with the digital revolution and threats to quality of information caused by the new media and their technological evolution.

Threats to quality of information

This chapter addresses some fundamental issues and questions about market failures and its direct or indirect relation with quality of information online. In short: is the market responsible, and if so, can quality of information be promoted simply by changing economic regulation?
The first clear answer is that self-regulation is an unreliable or insufficient tool for online media. That's why the debate is still open: the online market is different from the traditional media landscape, new instruments have to be found (data and privacy regulation, competition law, legislative and regulative interventions online). There are three approaches suggested.

The main threat in the short term is that concentration of information under a few gatekeepers may jeopardise the democratic debate. In spite of EU recommendations to the authorities, the situation is still worrying. The Code of Practice (against the spread of online disinformation and fake news) proposed by the Commission is at the moment the main instrument accepted by some major Internet players. Unluckily, its application has so far been unsatisfying.

As the current role of the tech giants affects not just the markets, but more generally the public sphere, and as the impact of disinformation on public opinion is still unclear, this chapter examines the debate about changing the competition law and introducing new regulating measures, citing some practical cases occurred in Germany and in the UK.

In the long run, the study confirms that media literacy is “the fundamental precondition for a critical approach to online content and it is therefore a core element in the future of media pluralism”. This is confirmed by most analyses and many reports taken into consideration for this essay. But 24 out of 28 EU members have underestimated this issue, not developing or under-developing media literacy policies since 2016.
Related to digital media literacy, the essay suggests supporting technical empowerment of journalists: helping investigative journalism with direct investment of public resources may become a long-term public policy goal.

Threats to quality information and media pluralism online essentially come from two sources: increasing concentration of economic resources and spreading of disinformation. This can deteriorate the democratic debate. It is difficult to agree on regulations and solutions.