A team at the Pew Research Center conducted a public opinion survey in eight countries of Western Europe about trust in news media in relation to how people place themselves on a left/right and on a populist/non-populist axis. Attention was also given to how people use social media as a source for news 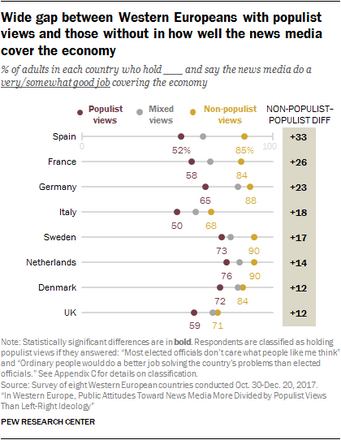 To evaluate the impact of populist views on attitudes about the news media, the survey firstly classified respondents as holding populist, non-populist and mixed views. The classification was based on the aswer the respondents gave to two questions, namely:

1) ordinary people would do a better job/do no better solving the country’s problems than elected officials and 2) most elected officials care/don’t care what people like me think. These questions were derived from key ideas on populism provided by academic studies.

The researchers explain that the reason for focusing on these core components of populism is that they cut across populist movements on the left and the right of the ideological spectrum. They also underline that by having a measure that is not constrained by left-right ideology, the survey provides a consistent, cross-national measure of some fundamental tenets of populism. Accordingly, this measure of populist views is correlated with higher levels of support for both right- and left-wing populist parties.

Against this backdrop, the research found that in Spain, UK and Italy right-wing people trust the news media at least somewhat more than people left-wing people. In Denmark, France, Germany and Sweden it is just the opposite, while in the Netherlands the percentage is exactly the same. But in all these countries people with populist views trust the media less than people with non-populist view. The populist divide thus seem to be more relevant from this point of view than the left-right divide.

Regional lines are also relevant, with people from Southern Europe (France, Spain and Italy) trusting the media less than people from Northern Europe (Netherlands, Germany, Sweden and Denmark). The only exception is the UK, in which the trust is generally low.

The majority of people (both populists and non-populists) trusts news media on “the most important issues of the day” but amongst various topics, trust is lower on immigration coverage.

The researchers also examined the audience’s ideological composition for eight outlets in each country. Then they asked respondents to place the outlets on a left-right axis. The result was that the actual audience of an outlet tend to perceive it as close to their own left-right ideological leaning, while people who know the outlet but do not read it perceived it as more polarized than their actual audience.

People tend to trust public broadcasters more than other outlets, the only exception being Spain. While populists tend to trust every single news outlet less than non-populist, there are some exceptions, such as Nya Tider in Sweden and Mediaset in Italy. The left-right divide reappears when we look at trust in specific outlets in Southern Europe countries. E.g. In Spain TVE is trusted by  74% of right-wing people but only by 32% of left-wing people.

In most countries a majority of people get their news from social media. Facebook is the one used more widely. Younger people use them more often that older ones. In some countries significant numbers of social media users do not pay attention to the source of the news they see on social network: 35% in France, 34% in the Netherlands, 32% in Italy. People are more likely to encounter news that do not reflect their personal view in social media than in personal discussion with friends. That seems to show that the echo chamber effect is not so much a problem. Moreover, people who more often see news they are in line with would prefer greater mix. The use of social media for news is not related with the level of trust in news media. In southern countries (France, Italy, Spain) plus Germany populists are more likely than non-populist to use social media for news.