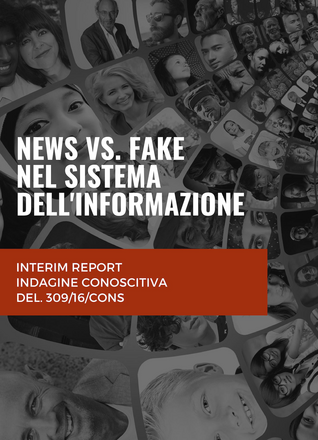 This is an interim report from an enquiry about “online platforms and the information system” by the Italian Authority for Communications Guarantees (Autorità per le Garanzie nelle Comunicazioni or AGCOM).

Researchers conducted an analysis of the quantity of information produced in Italy, finding a yearly increase, a seasonal effect (less news produced in summer), and an increase during the electoral campaign for the March 2018 elections. Online media produce more news than offline media: this over-exploitation of journalists can lead -according to AGCOM- to a lesser quality of content. Mediums that overuse journalists have a worse reputation.

Specialised news is mostly produced by non-specialised journalists. There is an excess of offer of "hard news" (politics, crime, foreign news) and culture and entertainment, and an excess of demand for specialised information, especially science and technology.

On average there is now more fake news than in the past. During the electoral campaign there is a peak in the rate of disinformation.

The life cycle of real news can start before the event itself, in the case of scheduled events. The peak, however, is on average 2 days after an event. The length of the cycle is different on different media: longer for online news, followed by newspapers, tv, radio, and social networks. Fake news has a shorter life cycle, and substantially no anticipation, but an higher daily coverage, as it tends to become viral. This means that fake content can be easily recognised from its life cycle.

Most fake news (57%) is related to hard news (crime, politics, foreign news), especially “politics/government”, followed by “rights”, “economics”, “health and environment”, “family and faith”, “crime”, “foreign news”, “science”, “immigration”, etc. Looking at the recurring terms in the “politics/government” topic, there are three main facets: political parties and politicians; institutions; elections and political participation. Looking at the recurring terms in the “rights” topic, it seems that the lever to disinformation is the necessity of being protected. It thus seems that disinformation uses emotional strategies.

Users tend to consume a limited numbers of news outlets. Users most active on social networks use less news outlets. A comparison between scientific pages and conspiracy pages on Facebook done in Italy and the US shows that in both countries there are two separate (and polarised) communities, but in the US the scientific community is more active.