Interviews and visits in 45 newsrooms in 5 countries about online harassment of women: based on data collected in cooperation with the Office of the Representative on Freedom of the Media of the Organization for Security and Co-operation in Europe (OSCE), this study examines the protection of female journalists as part of a broader analysis of newsroom strategies to counter online attacks and harassment on all journalists 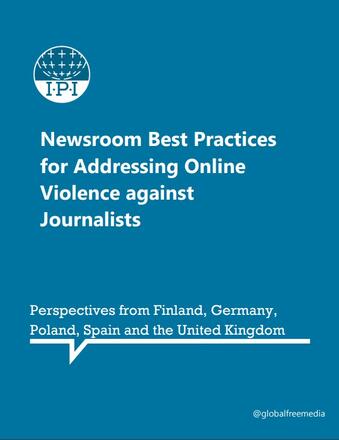 The research conducted in 5 European countries (Finland, Germany, Poland, Spain, and the United Kingdom) includes interviews with editors, heads of audience, journalists, and media experts from civil society and academia, thus combining experience on the field with theory and analysis.

As female journalists are more often targeted in online attacks, with strategies often applied to journalists of foreign origins or belonging to ethnic or religious minorities, this study aims at analysing the context, the type of attack, the consequences, and the practices to prevent attacks and protect journalists in their activity.

Among the similarities found in the 5 countries, attacks can be divided into 5 categories: belittlement (letting women feel not qualified to do their work just because they are women), sexist insults, explicit and veiled threats of sexual violence or death, threats and insults to family and relatives, campaigns aiming to discredit journalists professionally (attacks usually accompanied for women by messages of macho nature and humiliation).

An interesting result in the chapter “solutions” is that most newsrooms, “while they acknowledge the highly problematic consequences of online harassment on their journalists, do not have sufficient resources to dedicate to a proper strategy of prevention and protection”.

The report underlines the importance of peer support, acknowledgement by the whole newsroom, holding regular meetings, reporting cases to the police, and access to legal defence: in this field of “solutions”, the situation highly differs from country to country.

After the analysis of each single country according to context, problem, consequences, and practices, the report lists some recommendations for media outlets and editors, for journalists and for States, about prevention of and reaction to online harassment.