This 2014 OSCE Guidebook, released by the Representative on Freedom of the Media, approaches the issue of attacks on media in a comprehensive way, positing solutions to create a safe environment for journalists 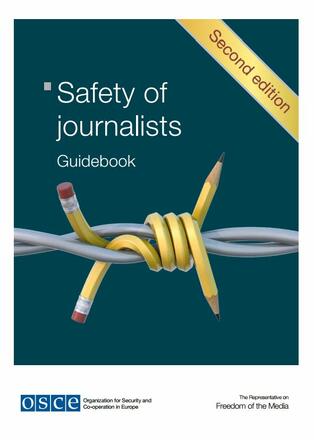 The safety of journalists has become an increasingly urgent issue for OSCE participating States. The scale of violence against journalists, including murders, attacks leading to serious injuries and cases of intimidation has grown significantly over recent years with far reaching effects. Arbitrary arrests and prosecutions, oppressive political and commercial pressures, and suffocating forms of official regulation, have also become commonplace for journalists working within the OSCE region. Those actions also give rise to fear and insecurity among journalists and other members of the media and have a chilling effect on freedom of expression within whole societies. The 2nd edition of this handbook examines the safeguards and challenges for the safety of journalists in OSCE Member States. It delves into the responsibilities of participant states, as well as in the crucial role played by civil society, NGOs and self-regulatory bodies in achieving the objectives set out in this field. Concerns about attacks on journalists and the media are aggravated by the reality that in some OSCE participating States a climate of impunity has developed concerning crimes of violence directed against journalists.