Reflecting the global trend, female journalists in the Balkans are more often attacked online than their male colleagues: an investigation with dozens of interviews and comments and an open platform to collect stories of attacks, harassment and threats, reports of a worrying picture where women are also left alone facing intimidation and its psychological impact 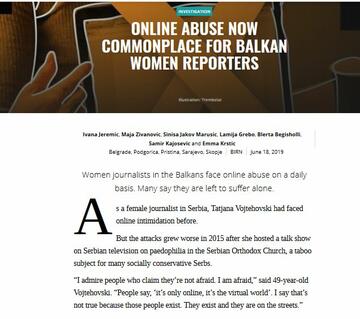 Media freedom in Montenegro: a survey of publications

#SOFJO campaign for the safety of female journalists online

The Background
“In a 2018 survey by the Washington-based International Women’s Media Foundation, IWMF, nearly two thirds of women journalists who responded said they had been threatened or harassed online at least once. Also in 2018, the International Federation of Journalists, IFJ, reported that 66 per cent of women journalists who were victims of online harassment had been attacked based on their gender”. According to this investigation, the situation in the Western Balkans is even worse.

The Findings
As in other countries, attacks on women journalists usually consist of “sexist insults and humiliation based on their physical appearance, rape threats and other gender-based attacks, which male journalists are not subjected to”. In the Balkans – this is the main finding of this investigation – women journalists face online abuse on a daily basis.

Safejournalist.net has documented 34 attacks in general against women journalists in Bosnia since 2015, 32 in Serbia, 13 in Kosovo, 10 in North Macedonia, and 8 in Montenegro.

Reaffirming that online abuse against women journalists is a “growing global epidemic”, the report is open to new stories thanks to the possibility of joining an online platform managed by BIRN: women are invited to tell their “experience facing online violence as a female journalist in the Balkans, whether it's attacks, harassment or threats”.

One of the most shared recommendations is that a link should be found between journalists and women's civil society organisations, beside building networks of female journalists. Laws are usually sufficient to prosecute the offenders, there is no need to add other legal tools, but their implementation needs to be improved.

According to most of the interviewed journalists, the persistence of gender-based stereotypes creates a difficult environment for women. Media expert Mehmed Halilovic says: “female journalists in the Balkans faced a perfect storm of widespread misogyny and disdain for journalists in general”.