Online violence against women journalists: a global snapshot of incidence and impacts

A survey, part of a broader UNESCO-commissioned collaborative study examining the incidence, impacts and responses to online violence against women journalists in 15 countries 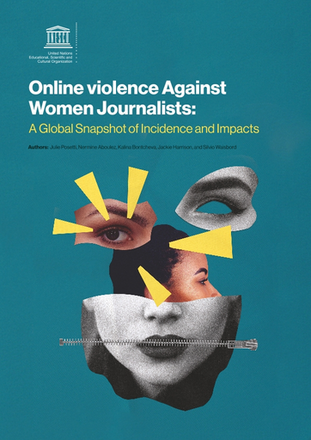 #SOFJO campaign for the safety of female journalists online

This report presents a snapshot of the first substantial findings from a global survey about online violence1 against women journalists conducted by UNESCO and the International Center for Journalists (ICFJ) in late 2020. Over 900 validated participants from 125 countries completed the survey in Arabic, English, French, Portuguese and Spanish. The findings shared here reflect the input of the 714 respondents identifying as women.

The psychological,  physical, and digital safety and security impacts associated with this escalating freedom of expression crisis are overlapping, converging and frequently inseparable.

The  phenomenon can be defined as a combination  of:  often  brutal,  prolific  online  harassment  and  abuse,  including  targeted  attacks  that  frequently  involve  threats of  physical and/or sexual  violence;  digital  privacy  and  security breaches that can expose identifying information and exacerbate offline safety threats facing women  journalists and their sources; and coordinated disinformation campaigns leveraging misogyny and other forms of hate speech.

Top findings include the fact that 73% of women respondents said they had experienced online violence, with threats of physical (25%) and sexual violence (18%), and that the mental health impacts of online violence were the most frequently identified (26%) consequence. Moreover, 41% of the respondents to this survey said they had been targeted in online attacks that appeared to be linked to orchestrated disinformation campaigns. Political actors are the second most frequently noted sources (37%) of attacks and abuse after, anonymous or unknown attackers (57%), according to the women respondents.