Openness, Transparency and the Right of Access to Documents in the EU

EU rules on access to documents are “seriously outdated,” according to a report presented to the European Parliament 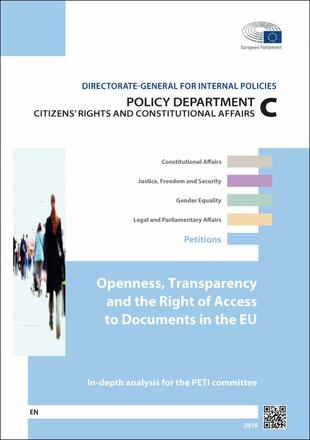 The report formulates a series of critical recommendations in relation to openness, transparency, access to documents and information in the EU and lays out some general guidelines for more transparency.

“The status quo is structurally inadequate,” the report points out. The Court of Justice of the European Union “is confronted with specific issues and outdated legislation on an ad hoc basis but cannot re-design the general system.” Nor can the European Ombudsman, the report says, praising her work. The first conclusion of the report calls EU legislation on access to documents “seriously outdated.”

Among other things, the authors question whether the European Central Bank should still be excluded from the provisions of the Access Regulation with regard to its policy-making and other tasks “given the manner that these tasks have expanded both in law and in practice since 2008.” “We do not see why it requires a blanket exemption anymore,” the report states.

The Court of Justice “should be encouraged to facilitate more pro-actively the access to its own documents and the documents of intervening parties in a structured and transparent manner, except where the requirements of secrecy should prevail (in particular as regards deliberations among the judges) in the public interest,” according to the report.

Among other conclusions, the authors write that “the balance between transparency and data protection is currently too strongly tilted towards the latter and disregards the fact that transparency and openness are also fundamental rights that should override especially in situations where disclosure does not create harm for privacy”.

The authors of the study, professors Deirdre Curtin of the European University Institute of Florence and Päivi Leino-Sandberg of the University of Helsinki, have been commissioned this study by the Policy Department on Citizens’ Rights and Constitutional Affairs at the request of the European Parliament’s Committee on Petitions. The committee held a hearing on the subject of EU transparency on June 20 (see video ).