Out of balance. Perceptions survey on EU defamation laws and their effect on press freedom: Results and analysis

This report presents the findings of a “perceptions survey”, carried out by the International Press Institute (IPI) to assess the impact of the European Union’s defamation laws on journalists, editors and media executives 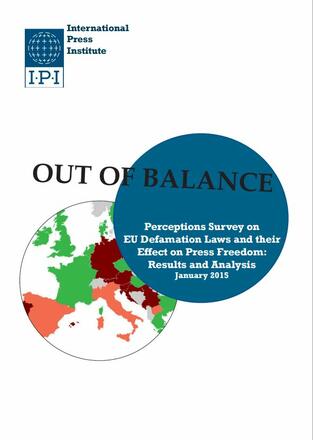 This report complements IPI’s report on defamation law and practice in the EU, which presents the findings of extensive research conducted into the laws of the 28 EU member states plus five out of six official EU candidate countries. Both documents make part of a broader IPI project on defamation in Europe, whose aim is to raise and disseminate awareness among EU policy makers and the general public on defamation laws and their effects on press freedom, as well as to inform journalists about their rights under international standards on free expression and thereby empower them to continue delivering news in the public interest. The launch of this report, together with the provisional overview, serves as the kick-off for IPI’s broader advocacy, training and capacity-building work in this field.