As part of a larger effort by Tactical Tech on The Influence Industry, Fabio Chiusi and Claudio Agosti wrote a report about the role played by data in political campaigns in the run-up to the 2018 elections in Italy 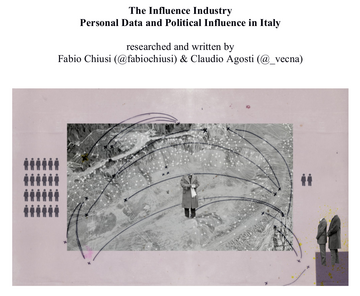 Television is still the main source of information for the Italian population. But Italy is also the homeland of the Five Star Movement (Movimento 5 Stelle, M5S), a political party that purports to realise direct democracy through a digital platform, called Rousseau. Rousseau has been criticised (including by the Italian Data Protection Authority) for its (lack of) cybersecurity, having being subject to at least two attacks - one by a white-hat hacker who wanted to highlight its vulnerabilities, and one by a black-hat hacker, who then put sensitive data up for sale. The M5S is not the first movement to embrace online activism in Italy - in 2009 the Purple People (Popolo Viola) was born on social networks - but it has been by far the most successful, becoming the biggest political party after the general elections of March 2018.

Online political campaigning is not as regulated as offline campaigning in Italy. In 2017, a law against fake news was proposed, but was later shelved after it was criticised as censorship. Before the 2018 general elections, the website of the State Police launched on its website a “red button” to signal fake news, on the initiative of then Minister of the Interior Marco Minniti.

OpenPolis  - a civic observatory of transparency in Italian politics - has brought to Italy the Political Ad Collector , a tool developed in the US by ProPublica . This has revealed some examples of microtargeting of voters. Cambridge Analytica claimed having worked with an unspecified political party.

Matteo Salvini, leader of the Northern League (Lega Nord), was able to move large numbers on the social network. This was possible also because of an app, that was later blocked first on Facebook and then also on Twitter, that allowed (real) users to “borrow” their account to Salvini in order to automatically like and retweet his tweets. “Selfbots” posting the same image and text at the same time have also been used. Political bots have also been used by other parties. Claims of Russian interference have been made, but evidence is lacking.

Claudio Agosti, one of the two authors of this report, developed a tool, called “Facebook Tracking Exposed ”, to better understand the Facebook algorithm. It was used to understand fairness in the algorithmic distribution of political content on Facebook in the run-up to the vote. Far-right users are exposed to less diverse content than the others (filter bubble) and to a disproportionate amount of photos. Centre-left content scored a significant amount of repetition in all news feeds, and especially in that of the neo-fascist bot, even if the sources published less content than the others in absolute terms. E.g. “even though conservative news outlet Il Giornale published a larger absolute number of posts during the analysed timeframe, progressive La Repubblica most consistently surfaced in News Feeds from all orientations”.