Pluralism under attack: the assault on press freedom in Poland 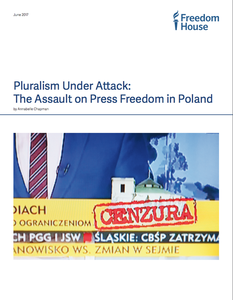 As Poland was home to Central Europe’s most dynamic dissident movement during the Cold War, the country is a key setting in the struggle between independent journalism and those who are pressing for state domination. In recent years, the leadership of the ruling party - the Law and Justice party (PiS) - has used its power to assault the autonomy of Poland’s democratic institutions, including the media. The leaders of the party have adopted many of the strategies used in Hungary after 2010, which led to antidemocratic changes.

The report, published in June 2017 by Freedom House, first gives an overview of Poland’s political context, then describes the media landscape, including the legal framework and a description of the main media actors in the country across all sectors (tv, radio, print, and electronic media). Since the fall of communism in 1989, Poland has developed a lively, but highly polarised media environment, with liberal-oriented media outlets and ultra-conservative ones. This polarisation mirrors the rift between the PiS and its political opponents and has become even more acute after the 2015 elections.

The report also explores the ownership structure of Polish media: foreign owners dominate the media market - in particular German ones, which control around three-quarters of the market.

A whole section is devoted to outlining the public media sector, which has been one of PiS’s first targets after the party won the elections in 2015. The ruling party changed the leadership and staff of public media. As a consequence, 225 journalists of the public media sector either resigned or were laid off during 2016, with protests across the country. Furthermore, the newly created National Media Council, with its majority of PiS lawmakers, will give the governing party ongoing control over the public broadcasters’ management.

The report also explores the issues of advertising and distribution. In Poland, the press has long suffered from a shrinking market and growing competition from online publications. Moreover, since PiS came to power, there has been a shift in advertising towards right-wing media outlets.

In chapter 5, the report outlines the regional landscape and establishes some parallels between Hungary and Poland since PiS came to power: according to the author, the similarities have prompted suggestions that the Hungarian example served as a roadmap for Poland. The cases of Hungary and Poland, two countries which successfully joined the EU in 2004, are a signal that other countries in the region could follow in the worrying path of deterioration of media freedom and pluralism. According to the report, these cases have also revealed the limits of the European Union’s response towards member-state governments that break their own laws and commitments.

The struggle for Polish press freedom has yet to be decided, thus there is still time for Poland to change course. as the report reads: "the fate of media freedom in the country will send a powerful message, heralding wither the continued march of populist authoritarianism around the world or a turning of the tide and a new period of democratic resilience”.