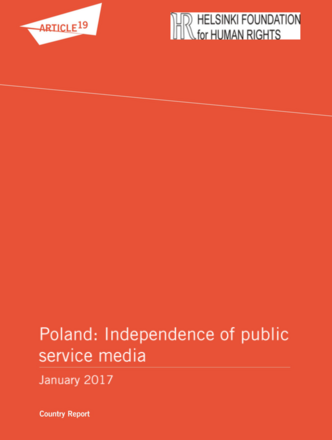 In this joint report, Article 19 and the Polish Helsinki Foundation for Human Rights put forward concerns regarding the independence of public service media in Poland.

Since December 2015 the Polish government has put in place a series of legislative measures aimed at placing public service media (PSM) broadcasters under its close control. Among them, the power to appoint and dismiss the senior manager of PSM, which is now in the hands of the National Media Council. Moreover, restrictions have been repeatedly imposed on the work of Polish journalists by limiting their access to institutions such as the Parliament.

One year after these legislative changes, the report finds that freedom, independence, and pluralism of the Polish media system is under “severe threat”.

After the diagnosis, the research offers specific recommendations aiming at bringing the legislation in conformity with international standards and invites all international organizations to seize any opportunity to remind the Polish government of its duties under international and European standards on freedom of expressions.