Police violence was a key topic of IPI’s November 2015 mission to Greece, carried out with the South East Europe Media Organisation (SEEMO). The visit highlighted how police violence against photojournalists is increasingly coupled with impunity. The report by SEEMO and IPI examines this trend. 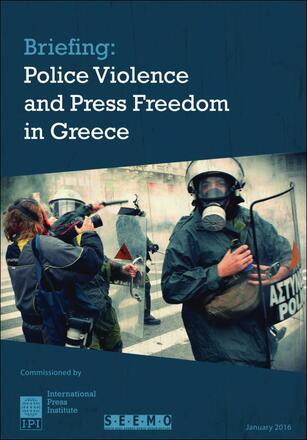 Though questions of police violence in Greece are not new, incidents involving journalists and photographers are considered to have increased in the context of the country’s ongoing financial and social crisis. Most of the photographers who suffered police aggression were attempting to cover anti-government protests; in a few cases, police are accused of failing to protect photojournalists from physical attacks by members of the extreme-right-wing Golden Dawn party.

Statistics kept by the Hellenic Photojournalists’ Union (EFE) and included in the report indicate that just one of 16 incidents of police aggression against photojournalists between 2010 and 2014 has resulted in legal consequences. In the majority of cases authorities have failed to even identify the perpetrator.

Inquiries actually start only when the incident receives publicity. Even those inquiries that may eventually take place, the report suggests, are hobbled by the institutional culture inside the police and difficulties in identifying the perpetrator. Moreover, charges are often dropped even when in incidents resulted in serious injuries.

IPI Director of Press Freedom Programmes Scott Griffen has pointed out that “Greek authorities have failed to hold those responsible for violence against photojournalists, who play a key role in informing the Greek public about the events and repercussions of the ongoing crisis. It is of equal concern that the structural flaws that have encouraged impunity in such cases appear not to have been addressed. The failure to ensure individual and systemic accountability obviously raises the possibility that similar events will continue to occur in the future.”