Pressure on journalists operating in Turkey has severely escalated in the period between the two parliamentary elections held on June 7 and November 1st 2015. The report has been produced following an Emergency Press Freedom Mission conducted by 8 organizations in October 2015. It assesses the rising pressures and threats on journalists as a serious obstacle to free and fair elections 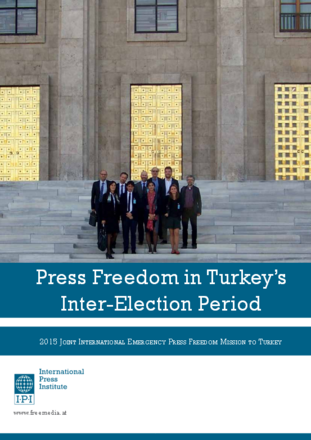 This report highlights the deep concerns expressed after the Mission conducted in October. Intimidation and threatening measures including legal cases against journalists for criticism of the president, applying anti-terror or criminal defamation laws to silence journalists, or using financial and economic pressure against media companies occur frequently. Moreover, ongoing imprisonment of journalists and deportations of foreign journalists, provoke a rise of self-censorship. Journalists’ abilities to report freely and independently on matters of public interest shrink and the pressures are likely to hinder a free and fair election.

In the report, the mission’s representatives ask for a climate in which journalists are able to freely investigate stories involving matters of public interest, including allegations of corruption, the “Kurdish issue”, alleged human rights violations and armed conflict – particularly issues related to the ongoing conflict in Syria.