This UNESCO report provides an important insight into the evolution, current status and challenges of the effective implementation of media self-regulation systems in South East Europe and Turkey 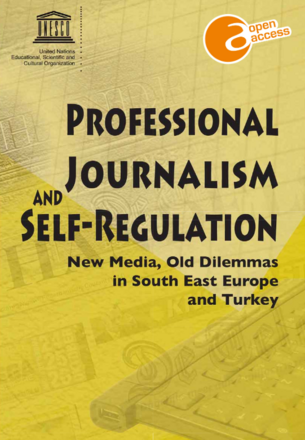 This publication addresses some of the key issues discussed during a UNESCO-facilitated exchange on professional journalism and self-regulation in South East Europe and Turkey, and serves to reinforce the notion that media accountability systems built on self-regulatory mechanisms are critical in enhancing media professionals’ unbiased coverage, honesty, accuracy and reliability. The project was implemented in Albania, Bosnia and Herzegovina, Croatia, Montenegro, Serbia, Macedonia, Turkey as well as in Kosovo. Self-regulation protects the rights of journalists to be independent and impartial, as media self-regulatory instruments - including codes of ethics, press councils, and the positions of news ombudsman and readers’ editor - serve as an essential source of guidance to journalists. Fostering the media’s responsibility towards the public and enhancing the quality of the media through voluntary mechanisms, self-regulation provides a positive answer to citizens’ demand for accountability of journalism.

As the authors contributing to this publication illustrate, self-regulation is closely linked to the credibility of the media, to their audience’s trust in them. The above mentioned being the positive results of the effective function of media self-regulation, the result is far from achieved in South East Europe. Obstacles identified include insufficient tradition in the implementation of media self-regulation, low public trust in the media sector, political and economic pressures faced by media outlets and the important ties existing between politics, businesses and the media. The publication sheds light on critical emerging issues for media accountability today. Confronting old dilemmas, journalists must abide by high ethical and professional standards in an environment that is revolutionized by the impact of new technologies. Contributing authors consider how media self-regulation fits into this new and ever-evolving picture, describing the impact of technological developments on media business models and traditional journalistic practices in South East Europe and Turkey, and the consequences that this bears for ethical and professional standards.