The report is an in-depth analysis of librarians’ and public libraries’ role in promoting information and media literacy, written for the CULT Committee of the European Parliament 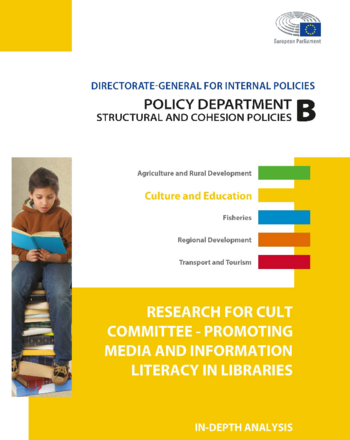 This digest has been produced in cooperation with the students of the University of Trento, within the seminars "Come diventare un analista politico: ricerca, informazione, e divulgazione sulle politiche europee".

The report starts by providing definitions of media literacy, which is a relatively new concept, and a historical overview of the term. It underlines the importance of differentiating media literacy from information literacy. In fact, although the two share some common ground, they belong to separate academic and practical traditions. Information literacy conceives “information” as neutral, pure “content” without taking into account the form it takes. On the other hand, media literacy problematizes the interrelation between content and form. One of the most recent definitions of media literacy was given by the Council of the European Union (2016), that described it as: "all the technical, cognitive, social, civic and creative capacities that allow us to access and have a critical understanding of and interact with both traditional and new forms of media".

The report underlines that public and other types of libraries are central for the enhancement of media literacy and of information and digital literacy. Most public libraries still focus on what they can do best (information literacy, including digital literacy) for the persons who need it most. Few other libraries, on the other hand, are committed to use their spaces and activities not just as a place where people can read and borrow books ('reading and writing literacy'). Their activities seek to combine a defensive, protectionist approach to media literacy (protect children from harm, prevent the elderly from becoming isolated) and an offensive, empowering one (assist people in improving their skills and support their creative talents). All this could lead to a change in the perception of the role of the public library, also by empowering users to share their knowledge with other people who would learn from them.

As for the policy approaches to the issue, the report recalls that libraries, international organisations, and governments have tried to formalise their approach to media and information literacy in different policy documents. For instance, the European Commission and the OECD recognised the importance of information and knowledge for citizens in general, for the economy, and for society. However, by stressing the economic growth potential of a healthy IT sector in Europe, they elaborated the discourse in economic and technological terms, mostly ignoring information literacy in a social and cultural sense. On the other hand, since 2012 the International Federation of Library Associations and Institutions (IFLA) and UNESCO have been collaborating on Media & Information Literacy (MIL) through the Moscow Declaration on Media and Information Literacy of that year.

In recent years, researchers have devoted several studies to information and media literacy, mostly dedicated to the broader study of information behaviour. Therefore, researchers' attention has been devoted so far to the way people interact with information, aiming to understand the process of information literacy and measure it in terms of self-efficacy. Studies on the effectiveness of media education in general have not been able to provide solid evidence yet. Nonetheless, practitioners and researchers find that media literacy programmes can successfully change attitudes and, sometimes, behaviors. A longitudinal study into the influence of media socialisation of children by their parents shows long lasting effects on children's’ cultural and cognitive development that could be, however, both positive or negative.

In conclusion, as recognised by the Education and Training 2020 Framework, libraries - particularly public and school libraries - have a potential to support all the aspects of literacy, including reading and writing, information literacy, and media literacy. The report concludes that, in order to develop their full potential in increasing media and information literacy, it is crucial that public libraries are supported, both in a political and economic sense, to transform into community learning centres.