Propaganda and Freedom of the Media

In response to the increasing impact of propaganda witnessed within the conflict in Ukraine, this treatise developed by the OSCE Representative’s Office offers an in-depth look at the legal and historical basis against propaganda and provides suggestions to tackle it

Publication Date: November 2015
Publisher: Organization for Security and Cooperation in Europe
Link: Propaganda and Freedom of the Media 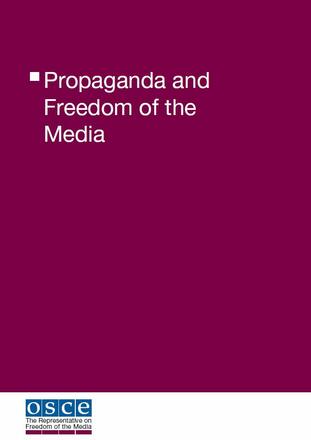 The ongoing conflict in and around Ukraine has brought back to Europe the danger of propaganda dominating the public sphere, causing distortions of media freedom and pluralism and limiting the open exchange of ideas.

This treatise is a resource for the understanding of the legal and historical basis for the case against propaganda. It distinguishes two sorts of propaganda in the contemporary world, the first being propaganda for war and hatred, which demands legal action with appropriate measures in accordance with international human rights law. The second type of propaganda does not necessarily violate international law, but it represents a serious threat against media freedom as it usually targets professional standards of journalism.

Regarding international standards, a particular focus is offered in this publication on the relation between Article 19 (on freedom of expression) and Article 20 (on banning war propaganda and incitement to hatred) of the International Covenant on Civil and Political Rights (ICCPR) and its interpretations by the UN Human Rights Committee (UNHRC). Attempts to counteract propaganda through national laws are also considered, particularly in their potentially negative impact resulting in the restriction of access for foreign media.

The lack of a clear definition of the relevant terms involved- such as propaganda, war hatred, incitement- constitute a clear limitation to the possibility to intervene effectively against propaganda both at the national and international level. Within the toolbox sketched in the treatise, crucial elements to counter propaganda are identified in the consolidation of media pluralism coupled with the dismantling of government-run media: only a well-functioning, open, diverse and dynamic media environment can effectively neutralize the effect of propaganda. Moreover, an increase dialogue among journalists, with a consistent reinforcement of the role played by professional associations and media self-regulation is encouraged as an effective antidote against propaganda.