Protection of media freedom in Europe 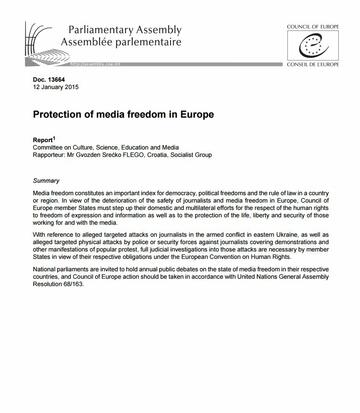 This 2015 report on media freedom shades light on the deterioration of the safety of journalists and media freedom in Europe. Drafted upon mandate of the Council of Europe, the report advocates for member states to increase domestic and multilateral efforts for the protection of media professionals and freedom of expression and information. The report stresses in particular the pressing concern in Ukraine, with sever attack against journalists during unrests in 2014 and in the armed conflict in Eastern Ukraine; in Russia, particularly because of a persistent climate of impunity concerning past attacks against journalists; in Turkey for the impressive number of journalists imprisoned (20 at the time in which the report is released) and internet censorship, and Azerbaijan for the repressive actions against journalists and human rights defendders. A cross-country concern is found regarding the issue of impunity for crimes committed against journalists and other media professionals.