Public Service Media in the context of disinformation and propaganda

This report explores the critical role of the Public Service Media (PSM) in counteracting the widespread phenomenon of information disorder, calling for a joint action among relevant actors and highlighting core novel “best practices” and activities undertaken by public service media organizations worldwide 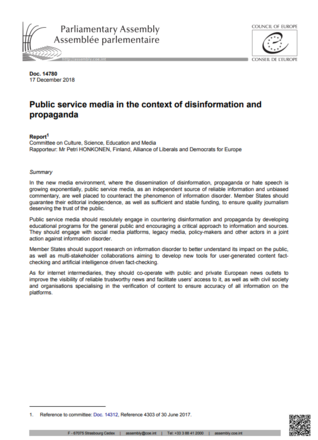 After presenting a 2018 draft resolution in which the Parliamentary Assembly reiterates the role of PSM for democracy and calls for a series of fundamental good practices in the PSM sphere (editorial and institutional independence of PSM, stable funding, regulation, research and multi-stakeholders discussions), the rapporteur introduces the complex and dynamic processes undergoing between PSM and the information disorder phenomenon.