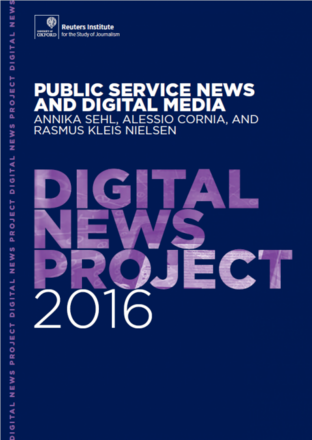 How are public service media services delivering news in an increasingly digital environment? And what action do they need to take to remain competitive in a fast-evolving global digital landscape?

This Reuters Institute report looks at how public service news organisations in six European countries (Italy, Poland, the UK, France, Germany and Finland) are navigating an increasingly digital landscape. While some public service news organisations, notably the BBC in the UK and Yle in Finland, have invested heavily and are navigating the challenges brought by digital media with sophistication, others are struggling to adapt.

What are the idea conditions that allow a public service news organisation to flourish? And who is remaining competitive in a shifting media environment? Dr Annika Sehl, lead author of the report, points out: “We found that the key common traits between the conditions in which the BBC and Yle operate, and which contribute to their notable success, could be split into external and internal conditions. Looking at external conditions, both operate in technologically advanced media markets, are comparatively well funded, are integrated and centrally organised across various platforms and have a degree of insulation from political influence, in comparison to other public service organisations. “Internally, they benefit from a pro-digital culture where new media are seen as opportunities as well as strong senior management and editorial leaders who are publically committed to driving change in line with a constantly evolving media landscape.”

Text sourced from Reuters Institute for the Study of Journalism