Pushing on an Open Door: Foreign Authoritarian Influence in the Western Balkans 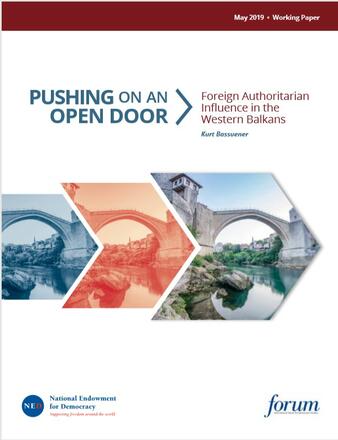 The aim of this paper is to describe “the integral role that engagement by authoritarian regimes in the region’s public sphere, particularly through the media, has played in the new tectonic alignment between Balkan elites and external powers such as Russia, Turkey, China, and the Persian Gulf monarchies”.

The report explores the influx of investments from these states and their impact on existing political, economic, and information environments in the Western Balkans, suggesting steps to protect the public sphere and establish accountable democratic governance.

Analysts suggest that most countries in the region are losing ground on the rule of law, media freedoms, and democratic accountability more generally. State capture, erosion of independent media, and the growth of corrupt patronage networks are features of this landscape, while authoritarian foreign powers gain more and more influence in the area.

Some issues are of greater importance, such as the ability of governments to “insulate their agendas from media scrutiny”, and the de facto alliance between outside actors and local illiberal elites.

The report analyses the impact of foreign authoritarian influence giving a detailed list of actions implemented by the single actors: Russia, Turkey, China, and the Gulf States. What they all have in common is the mode of governing through personalised power.

“Opaque deal-making is notably facilitated by the weakness of independent media in the host countries, where Balkan political elites tend to dominate domestic media narratives through control of major broadcast stations and other key outlets”. That’s why “authoritarian powers attempting to exert influence on leaders and publics through state media initiatives in the Western Balkans are pushing on an open door”.