Record number of jailed journalists in 2017

According to the 2017 prison census of the Committee to Protect Journalists (CPJ), 262 journalists are behind bars around the world in relation to their job. Turkey remains the world’s worst jailer for the second consecutive year, with 73 journalists imprisoned, followed by China and Egypt 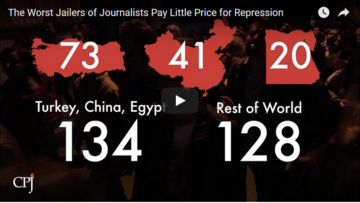 The Committee to Protect Journalists (CPJ) has found that the number of journalists imprisoned has reached a historic high for the second year running.

Their report found that on 1 December 2017, there were 262 journalists imprisoned for their work, up from 259 last year.