This Report by Nils Muiznieks, Commissioner for Human Rights of the Council of Europe, follows his visit to Bulgaria from 9 to 11 February 2015. The situation of media is one of the worring elements which called for the attention of the Commissioner.

Publication Date: May 2015
Publisher: Council of Europe
Research and Editorial Team: Nils Muiznieks
Link: Go to Report by the CoE Commissioner for Human Rights following his visit to Bulgaria 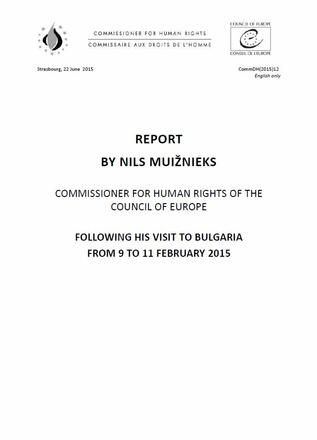 Following his visit to Bulgaria in February 2015, Commissioner for Human Rights of the Council of Europe Nils Muižnieks released a report shading light on three aspects which raised most concern from dialogues with local stakeholders held during his visit. The three elements considered are: 1) the process of de-institutionalisation of children and people with disabilities, 2) human rights of migrants, asylum seekers and refugees and 3) the condition of media freedom. Below are highlighted the main elements raised in relation to the situation of media in the country.

Despite existing legal guarantees, media freedom in Bulgaria is currently impeded or threatened by a combination of practices which, taken together, create an environment conducive to widespread self-censorship among journalists and undue external pressure on media.

Firstly, media concentration and the lack of transparency severely affect the Bulgarian media landscape. The existing law on competition proves inadequate to regulate media concentration, and information concerning media ownership is not fully accessible nor reliable. Along with this, Bulgarian media are characterised by the prominence of very few owners- oligarchs and even the distribution of news papers resembles a situation of monopoly . As a consequence of this, media have their function to inform people weakened and are turning instead into a tool to fight “ media wars” , where media “conglomerates” reflect the political and economic polarisation present in the country.

The Commissioner also expresses his concern for the limited political and economic independence of media. This problem involves more seriously private-owned outlets, heavily affected by the economic crisis and the consequent fall in newspapers circulation and advertisement revenues. Being the Government and local authorities the largest advertisers in the country, media outlets have hence become more exposed to economic pressure and political influence. The economic dependence is less acute for public service media, but the system of financing public broadcasters is reported to keep them potentially dependent upon political pressure.

There are some common practices that conduct Bulgarian media to self-censorship: the threat of sanctions-an example of which is the reaction by the Financial Supervision Commission against the media outlets who reported the 2014 bank crisis-, the practice of forcing media to reveal their sources, and the failure in decriminalizing defamation, which is still a criminal offence in Bulgaria.