This report by Nils Muižnieks, Commissioner for Human Rights of the Council of Europe (CoE), following his visit to Serbia from 16 to 20 March 2015, assesses the state of human rights in Serbia, devoting attention to media freedom in the country. Among the issues raised by the Commisioner there is the importance of the ongoing process of privatization, the recurrence of attacks against journalists and the lack transparency in media funding 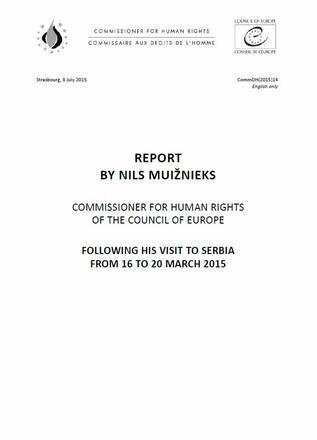 In his 2015 Report, the Council of Europe Commissioner Nils Muižnieks assesses the state of human rights in Serbia. The main issues emerged are those pertaining transitional justice and reconciliation, the actions that should be adopted against discrimination and freedom of the media.

The Commissioner praises the efforts that Serbia has undergone over the last four years, particularly the adoption in 2011 of a Strategy for the the Development of the Public Information System, the decriminalisation of defamation in 2013, and the enactment in 2014 of the Law on Electronic Media and the Law on Public Service Broadcasting together with several implementing decrees.

The new media legislation aims at enhancing transparency of media ownership, at ensuring pluralism, it foresees that public media financing should be “project-based” - with an independent assessing commission - and provides that all the state-owned media should be privatised by July 2015. The Commissioner therefore urges Serbia to proceed with the implementation of the newly adopted media legislation that has the potential to enhance much needed media transparency.

The Report notes persisting lack of transparency, particularly owing to the fact that some media loyal to the Government have had their tax debts forgiven or received advertising financement. This discrimination testifies to the existence of political links. It favours polarisation and generates censorship, self censorship ultimately leading to tabloidisation of media outlets.

Another serious matter of concern is the safety of journalists and the impunity of the crimes committed against them: between 2008 and 2014 several cases of physical and verbal assaults, acts of intimidations against journalists and attacks to their properties were reported to the police.

The Serbian Government finally established a Commission for the investigation of journalists’ murders committed during the Milošević era, such as the one examining the murder of Slavko Curuvija, which began in June 2015 in Belgrade. However, obstructions by some former state officials continued to hinder progress in the pending cases.

The Commissioner calls on Serbian authorities to undertake prompt, thorough and transparent investigation when violence or threats against journalists occur, to bring all perpetrators to justice. The common practice of public officials to attack journalist with inflammatory remarks must stop as well.

The Commissioner welcomes the initiative of the Ministry for Culture and Information to organise a meeting with media representatives to discuss and raise their awareness of the importance of increasing their own websites’ security and encourages the authorities to continue addressing security and other relevant issues pertaining to the Internet.

The report also addresses the issue of self-regulation, by noting that journalists themselves have to promote and defend high standards of ethics avoiding sensationalism and unethical reporting - particularly when addressing vulnerable groups - and the use of media to discredit political opponents with derogatory language and hate speech. The fact that many tabloids are not member of journalists’ association and therefore not subject to any scrutiny also concerns the Commissioner.