Report on the Use of Targeted Sanctions to Protect Journalists

The report examines current challenges faced by journalists around the world and recommends the consistent use of targeted sanctions as a tool to enforce compliance with international human rights law, including the right to a free press 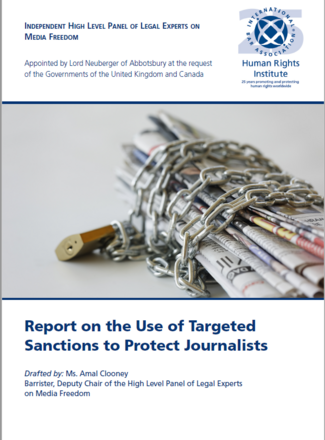 The report, published by the International Bar Association’s Human Rights Institute, contains an in-depth analysis of the existing systems for targeted sanctions in the United States, the United Kingdom, Canada, and the European Union and concludes with eleven recommendations for designing and implementing global human rights sanctions regimes to better protect journalists around the world.

The sanctions applied by States refer to violations and threats faced by journalists and the media, which are listed as follows:

(ii) torture and other cruel and inhuman and degrading treatment;

(v) other forms of persecution, including through the enforcement of excessive libel laws, the filing of frivolous lawsuits or financial investigations, threats and online harassment, surveillance and ‘doxing’ of sources;

(vi) systemic restrictions on the media, including limitations on licencing, accreditation and financing as well as shutdowns of entire media outlets and internet communications.

Quoting an article by The New York Times, the report states that such measures have led to a ‘worldwide assault on journalists’, an ‘assault on the public’s right to know, on core democratic values’ and, ultimately, on ‘the concept of truth itself’.