Stating that “the fight against disinformation must continue”, in this report the European Commission checks the progress achieved by the Action Plan against Disinformation, explaining how it helped deter attacks, expose fake news, and encourage journalists and national authorities before the European Election 2019

Publication Date: June 2019
Publisher: European Commission
Research and Editorial Team: High Representative of the Union for Foreign Affairs and Security Policy
Link: Report on the implementation of the Action Plan Against Disinformation 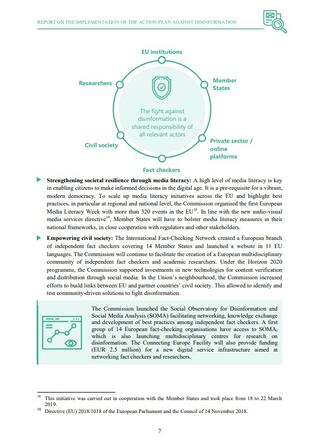 In order to protect democratic processes and institutions from disinformation, the EU has put in place a robust framework for coordinated action which is fully in line with European values and fundamental rights. In Decembre 2018, the High Representative of the Union for Foreign Affairs and Security Policy launched the Action Plan against Disinformation (as detailed in our special dossier on Disinformation ).

According to this report, one of the main achievements of the EU actions is that “increased public awareness made it harder for malicious actors to manipulate the public debate”, and this happened thanks to different levels of engagement, such as being able to identify and counter disinformation through the Strategic Communications Task Forces and the EU Hybrid Fusion Cell, implementing a voluntary Code of Practice, spreading more fact-based messaging and promoting media literacy, beside supporting Member States' efforts.

In a few pages, the report outlines the above mentioned measures and gives some numbers related to online platforms, for example the removal of fake items from online platforms in the pre-election months: from January to May 2019 Google removed more than 3.39 million Youtube channels, while Facebook disabled 2.19 billion fake accounts from January to April.

Though some aspects are satisfactory, the report reaffirms that there is a lot to be done.

The implementation of the Code of Practice is far from being complete, and before the end of the year the Commission will assess the effectiveness of the Code following its initial 12-month implementation period. There might also be initiatives of a regulatory nature.

The report confirms that “the fight against disinformation is a shared responsibility of all relevant actors”, including EU institutions, Member States, Private sector/ online platforms, fact checkers, civil society, and researchers.

According to the report, there have been many actions to prevent election interference, such as better protection against cyber-threats and statements on the use of personal data in political campaigns. A comprehensive report on the elections will follow in October 2019.

The Commission's attention on the topic will remain strong, as “the rise of targeted disinformation campaigns will remain a major challenge for the future”.