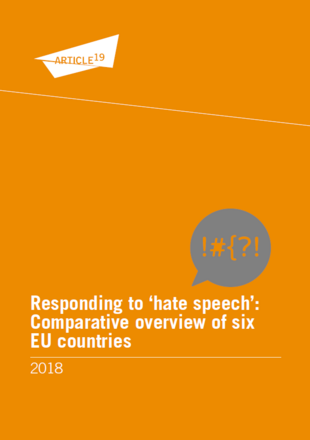 Carried out as part of Media Against Hate campaign, this ARTICLE 19 research summarises the findings of six country reports (commissioned in 2017 for Austria, Germany, Hungary, Italy, Poland and the United Kingdom) by identifying commonalities and differences in national approaches to contrast hate speech and exploring good practices that could be replicated. The main objective of this study is to assess the legal and policy framework on hate speech in each country, in order to develop recommendations towards ensuring better protection of both the right to freedom of expression and the right to equality in the EU.

According to the report findings, hate speech is a significant problem across all the examined countries: it is reflected in the media and in the political discourse, sometimes including statements made by public officials. Over the past two decades, hate speech incidents have increased, a trend driven by the long-standing global economic crisis and the new flows of migrants and refugees in Europe. A tense political debate is especially surrounding the role of the EU in responding to this phenomena, while “eurosceptic” rhetoric has also been playing a role.

Although the legislation of the six countries contains strong guarantees for both the right to freedom of expression and the right to equality, the applicable legislation does not necessarily fully comply with international freedom of expression standards. In many cases, the rise in prejudice and intolerance can be directly linked to a government’s own policies and communication strategies. Special attention is given to the regulatory frameworks through which hate speech in the media is addressed. Finally, the report offer a recommendation list of eleven measures to be undertaken at national level in order to improve the protection of the rights to freedom of expression and equality both nationally and regionally.