The 2017 edition of the Digital News Report by the Reuters Institute, the most comprehensive ongoing comparative study of news consumption in the world, focuses on the issues of trust in the era of fake news, changing business models and the role of platforms 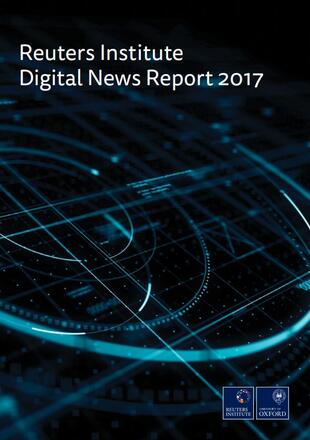 The annual report “Digital News Report 2017 ” by the Reuters Institute for the Study of Journalism focusses on three areas: (1) the extent to which people are prepared to pay for news and the different ways journalism might be funded; (2) understanding the drivers of declining trust in the media; (3) the media's relationships with platforms and how news is discovered and consumed within distributed environments, like social media, search and online aggregators. The report's evidence cast new light on some of the prevailing narratives on issues that have been widely debated in recent years, such as fake news, media business models and the power of platform. At first, the report finds out that internet and social media may have amplified low trust and boosted fake news, but, according to the authors, in many of the countries analysed the drivers of mistrust is due more to political polarisation and perceived mainstream media bias than to social media. Second, the report minimises the impact of echo chambers and filter bubbles, since "on average, users of social media, aggregators and search engines experience more diversity than non-users".

The research is based on data covering more than 30 countries and five continents, and elaborates on a survey of more than 70,000 people in 36 markets. In section 1-3, it presents the key findings and a viewpoint on journalism's current dilemmas from Melissa Bell, co-founder of Vox Media. Then, it exposes individual country profiles, which highlight critical industry context, also with the support of charts and data point. The main focus remains in Europe, with 3 additional countries covered in 2017, i.e. Slovakia, Croatia and Romania.

When it comes to trends and attitudes toward social media, news and consumption habits, the research found out that growth in social media for news is diminishing in some markets, while messaging apps are becoming more popular. Such apps provides more privacy guarantees and usually do not filter content by means of algorithm. In Spain, for instance, WhatsApp for news is starting to rival Facebook (32%). Trust in social media for news is low, if compared with the news media. In most of the countries surveyed, researchers found a strong connection between distrust in the media and perceived political bias. This is true in particular in countries where political polarisation is high, such as Italy and Hungary. Mobile is significantly growing, outstripping computer access for news in an increasing number of countries. A related development concerns the growth in mobile news aggregators, notably Apple News and Snapchat Discover, especially for the youngsters. Smartphones are increasingly important for news both inside the homes and outside.

In terms of online news subscriptions, the report found out that there has been a substantial "Trump bump" in the US, along with a boom in news donations. Interestingly, most of those donations were done by the young, contrary to the narrative of young people not willing to pay for online media.

Moreover, the report found new evidence that news brands are interested in cutting through on distributed platforms. This may be due to the fact that many users could not recall the name of news brand when coming from search and social, meaning that the level of attribution and recognition for news brands in social media is low.

The report also downplays the role of social media for news, explaining that social media are just part of the everyday information mix. The authors thus stress that "this evidence acts as counter to the often-cited theories that we live in our echo chambers much of the time", as most people combine a number of different sources and platforms for news.

Also, evidence show that, outside the United States and United Kingdom, growth in the use of social media for news seems to decrease. For instance, in countries like Portugal and Italy we have significant declines (-4 and -5). This may be the signal of market saturation, or it may be related to changes in Facebook algorithms in 2016 or to the change of people's habits, meaning that they spend less time with social networks and more time with messaging applications.

The implications of algorithmic selection of stories is a debated topic as well as a key question for policy makers. The issues include, among others, how discovery content through social media, search and personalised aggregators are affecting the range and type of news, and whether algorithmic selection drives to more extremist and polarised content. The evidence outlined in the report show that, far from restricting content, algorithms are exposing most users to a greater range of online sources.