This study explores the ways news is being consumed in a range of countries. This year's report focuses on the issues of trust and misinformation, media literacy, new online business models, the impact of changing Facebook algorithms and the rise of new platforms and messaging apps 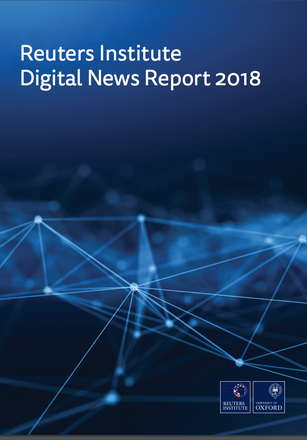 The 2018 edition of the Digital News Report by the Reuters Institute for the Study of Journalism highlights some signs of “hope” for the news industry. A new focus on quality content and more emphasis on readers' payment is emerging, which goes hand in hand with increasing political and consumer demands for trust and quality. The report also affirms that for the first time there has been an halt in the move to distributed content via social media and aggregators, while subscriptions are increasing in a number of countries. However, as the authors say, “this changes are fragile, unevenly distributed, and come on top of many years of digital disruption, which has undermined confidence of both publishers and consumers". Report’s data show that readers' trust in the news remains low in most countries.

The Report has a global coverage and covers 37 countries. As for Europe it includes the following ones: UK, Austria, Belgium, Bulgaria, Croatia, Czech Republic, Denmark, Finland, France, Germany, Greece, Hungary, Italy, Ireland, Netherlands, Norway, Poland, Portugal, Romania, Slovakia, Spain, Sweden, Switzerland, and Turkey. The research for this report was conducted through online questionnaires delivered at the end of January / beginning of February 2018. Face to face focus groups were held in the US, UK, Germany and Brazil.

The Report is composed of three sections: the first one (by Nic Newman, Research Associate at the Reuters Institute) explores the main findings of the research; the second section analyses topics specific to this year's edition and presents a comparative view to international issues such as: news literacy; misinformation and disinformation; trust in news brands; alternative and partisan news brands; donations and crowdfunding as emerging opportunities for journalism; the rise of messaging apps for news, podcasts and new audio strategies. Finally, the third section presents country by country analysis.

Summary of the most important findings:

-The use of social media for news, especially on Facebook, has started to fall after years of continuous growth in key markets, e.g. in the US, UK and France. However, a rise in the use of messaging apps for news (especially Whatsapp) and social social networks like Snapchat and Instagram is still visible, since consumers seem to look for more private spaces to share information;

-Over half of the surveyed people agree that they are concerned about what is real and fake on the internet: this is highest in countrues where high polarization is combined with a high use of social media;

-Most respondents believe that publishers and platforms have the biggest responsibility to manage the problems of “fake” and unreliable news;

-In Europe there is a more positive attitude towards government intervention to stop fake news, while in the United States only four in the 10 believe that governments should do more;

-The Report measures for the first time news literacy with regard to readers’ attitudes towards paying for the news: evidences show that readers with higher level of news literacy tend to prefer newspaper brands over TV and use social media in a more critical way if compared to the wider population:

-The average number of people paying for online news registered a significant increase, especially in some countries (i.e. Northern Europe), while last year's significant increase in subscription in the United States (the so called Trump Bump) has been maintained. In countries like Spain and UK an alternative model, based on donations and donation-based membership is emerging, especially among the youngsters.

-Television remains a critical source of news for many, but decline in annual audience and the continuing pressures on public broadcasters raise the questions of their future role as well as their ability to attract youtger people;

-Podcasts are becoming popular across the world, while Americans and Europeans would like to see fewer online news video.