The report aims at understanding how news is being consumed across the world. This year’s focus is on people’s trust in media and their willingness to pay for news, private messaging applications and groups, misinformation, and habits of younger people 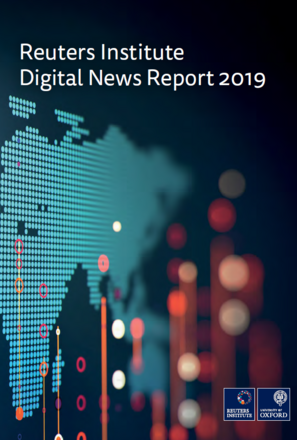 Through an online survey of over 75,000 people in 38 countries (including 24 in Europe), the 2019 Digital News Report by Reuters Institute for the Study of Journalism highlights recent trends in the news industry and analyses the evolution of people’s habits in the use of digital media.

The power of giant tech companies and their advertising operations have undermined news business models, while online political polarisation and misinformation have contributed to undermining trust in the media.

The first part of the report focuses on the main findings of the research.

Section 2 contains six in-depth analyses on specific issues (such as the rise of populism and the consequences for news, younger generations, paying for news), while Section 3 provides country analyses from Europe, Americas, Asia Pacific, and Africa.

Although this year the analysis includes also South Africa and aims at global coverage, the research remains focused on countries with high Internet penetration and which either are broadly democratic or generally compare themselves to countries with a democratic tradition. With the aim of not creating confusion on comparative analysis, the country analysis of India has a separate report.